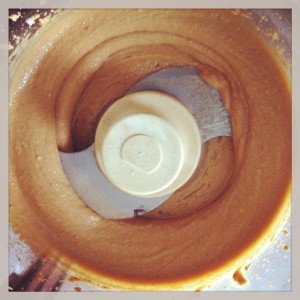 I never used to like peanut butter. In fact, if I’d see (read: smell) a knife with peanut butter on it on the kitchen counter, I’d walk around it with a 3 feet radius. It’s been like this my entire life. Until I found myself drawn to the kitchen a few weeks ago, mouthwatering and armed with a spoon, ready to serve myself an abnormal amount of peanut butter topped with chocolate paste. Bad for many, many reasons. But good for the soul.

So, to me, not liking peanut butter was a given fact of my life. It was a fact, a ‘truth’ that I became very familiar and comfortable with. Just like so many other things we use to define ourselves with. This is necessary and functional, for we need beliefs to act upon. We need a benchmark for who we ‘are’ now. But more often than functional, having these beliefs and ideas about ourselves is just plain easy. Comfortable. Until you start feeling that itch and it’s not anymore. Until life requires us to have a real good look at what we consider as ‘the truth’ about ourselves in order to take that next step, to evolve.

So, I have tried to eat peanut butter several times throughout my years on this planet and I don’t think I have ever said the word ‘never’. And still, it took me – and my sister – by great surprise that I actually liked it. Kind of.. loved it. So much that she actually told me not to put as much on my slice of bread. It might have been the fact that it was natural, unprocessed and unrefined peanut butter, as in the melt-on-your-tongue-sticky-amazing-kind-of-grinded-peanuts-withalittlebitofseasalt. Surely that had something to do with it. But really, it seems more likely that it had something to do with my being in India, where life took me on another spin in order for me to let go.

One of my intentions on my journey was to create space to find back my balance. I was trying to create space in ways that were along the line of my expectations: a deep focus on my practice with the relatively disciplined lifestyle that usually follows.  What happened was far from that. Apparently, in order to create space and find a new balance, my practice required me to let go. I needed to let go of everything. Habits. Thoughts. Ideas. And apparently, I let go of the belief that I didn’t like peanut butter along the way.

Sometimes, in order to find where we really are in this point in time, we need to let go all that we know, think and expect from ourselves. And I am still discovering. How much peanut butter do I actually like? What do I eat it with? Will it become part of my daily diet? For to let go of the definitions of the self and creating space free from definitions to see clearly, also means entering a period of asking questions and re-defining. Choosing our new definitions. In the complete realization and freedom that these too will change again one day. What we believe about ourselves now might not suit us anymore tomorrow, our truths change. Or better said, that the real truth might be just that: change.

So today my sister sent me a text with an imagine saying ‘If someone ever tells you that you’re putting too much peanut butter on your bread, stop talking to them. You don’t need that negativity in your life’. I smiled and laughed and I almost cried for I felt that huge power called life, with its beautiful perfection hidden in irony and funny twists. So I text her back: ‘Then I need to stop talking to you’. ;).

May we practice flexibility to allow change and stability to hold on to our beliefs.